With these muffins I knew that I wanted to do my favorite icing on these.   It was the cinnamon toast crunch that was a total random moment while I was standing in my pantry getting another bag of flour open because I was out.  I looked over at Karsyn who loves to help make messes in the kitchen and she had a bag of cinnamon toast crunch in her hands like “Hello, mom…can I get some of this? or no?” Haha! As I was making her a bowl I decided I wanted some too….in my muffins. 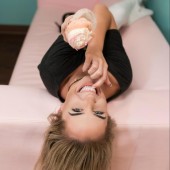